A Voyage Thru History

A wide variety of chateaux (castles) are dotted throughout each region illustrating France's history with their individual architectural styles and purpose.

Visiting a selection of these chateaux will take you from medieval times straight up through history to the last King of France's personal favorite.

Europe is full of castles, and in spite of the French revolution and the subsequent era of “la Terreur”, France has an extensive heritage of them as well.

Practically every region has a historical variety of examples, from medieval military fortresses up to the 19th century palaces or great houses preferred by the local nobility.

Do you have a favorite chateau that you like to visit? Is there one that other visitors should be sure to see? Tell us about it here!

Normandy is particularly rich in this respect, as it was a region whose proprietorship was the subject of many a war between England and France throughout the ages.

The castle ruins of Duke Robert, “the devil”, or alternatively, Robert “the magnificent” (possibly depending on whether he picked his dirty hose up off the floor at night, or not), near Rouen, the historic seat of the Dukes of Normandy, are still visible and can be visited. 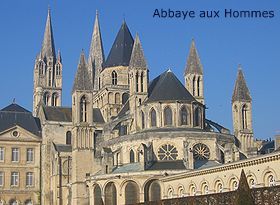 His son, “William, the Conqueror” or “Guillaume, le Conquerant” constructed the Abbaye aux Hommes or Men's Abbey, as well as the Abbaye aux Dames or Ladies Abbey, in Caen, in which both he and his wife Mathilda are buried respectively, or at least parts of Guillaume since he was, as was often the case, posthumously divided into bits and pieces.

One can also visit a lovely ruins of one of William's lords, the Seigneur de Longueville, whose castle in Longueville Sur Scie, sits behind a junior high school in the village, bears witness to a grandeur long gone for this quiet little town. 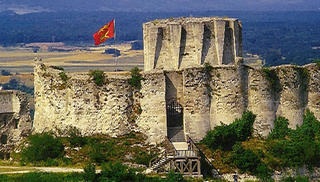 One of William's descendants, the famous Richard 1st of England, better known as Richard the Lionhearted, ordered the construction of a fortress near the town of Les Andelys, overlooking a bend in the Seine river. Unfortunately Richard died just before it was finished of an infected arrow wound in the shoulder. His brother, the infamous John, the bad king in the Robin Hood tales, saw to the castle's completion. 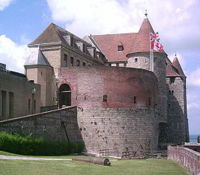 You'll find the castle in Dieppe, a military stronghold, standing tall, overlooking the sea, daring invaders to attack. Today, it houses an art museum and a wonderful collection of delicate ivory carvings. It's foundations are reputed to date back to the era of Charlemagne.

Farther inland, the castle ruins at Arques la Bataille tell of another battle between France and the English. It sits on a strategic promontory overlooking a river valley with an incredible subterranean network of tunnels leading down into the village at it's feet as well as possibly reaching all the way to the coastline, providing a safe exit during siege. 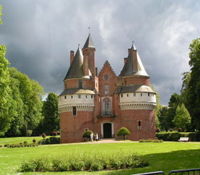 A bit to the north, you'll find the military fortress of Rambures complete with dry moat and “machicoulis”, those protuberances along the outside walls of the upper floors through which the defenders poured boiling water, dumped chamber pot contents and dropped heavy objects on the heads of the invaders trying to scale the walls with ladders.

Boiling oil is one of the first urban legends, oil being too expensive a commodity to simply dump on the head of an enemy. 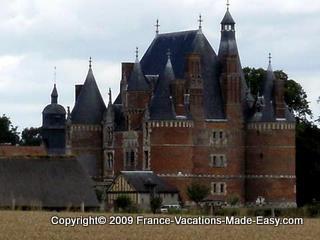 The castle at Martainville also dates from the 1600's and looks rather like what we'd expect a castle to look like - stone and brick facade complete with four round towers at the corners and heavy wooden doors studded with ironwork. This one was a residence and it's abundance of windows proves this. Inside is a nice collection of furniture and a relatively unique collection of period clothing.

Then there is the royal castle at Eu, the preferred residence of the very last king of France, Louis-Philippe, (no, it was not Louis XVI whose head was removed during the revolution). The royal place settings and furniture are on display here as well as the bedrooms he and his wife, Marie-Antoinette's niece, actually used.

The castle at Miromesnil near Dieppe, is an example of a domain changing hands throughout the different periods of history from noble families to the “nouveau riche”, back to the restored nobility. It claims, a bit controversially, to be the birthplace of Guy de Maupassant, author of Madame Bovary and many other novels set in Normandy in the 19th century. 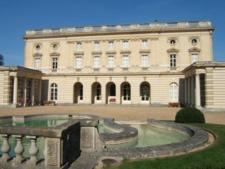 During the rise of the Emperor Napoleon the first, fashionable neo-classical chateaux, palaces really, with white colonnaded facades were built, illustrating the Emperor's personal desire to associate himself with the great Roman Emperors - the Caesars. A good example of one of these homes is the chateau of Bizy in Vernon, re-built in 1805. It's interior decoration is largely intact, and shows off wonderfully the elegant tastes of the time period.

These are just a tiny smattering of all the wonderful chateaux, as fortresses and homes, that Normandy has on offer to visit.

The aforementioned are open to the public for a fee, most times well worth it.

Some chateaux have guided tours in French, but most often there is a guide book or pamphlet available with a sometimes quaint translation in English.

Most have gardens attached which are definitely worth the time for a stroll. This time will be well spent photographing some wonderful outdoor perspectives of these most impressive edifices.

Do plan on visiting a few of these extraordinary edifices during your trip to France. They will provide you with a taste of life as our ancestors knew it, even if your particular ancestors, like my own, quite possibly worked in the stables or the kitchens.

What is Your Favorite Chateau in France?

Do you have a favorite chateau that you like to visit?

Is there one that is a must see?

Tell us about it here!

Return to France Vacations Made Easy Home Page from Chateaux