No, I’ve not gone tongue-tied talking about carrier pigeons, nor have you. Instead, I’m bringing up the topic of:

Granted, carrier pigeons are not the typical military history subject but I figure I should leave the tank talk to the experts.

Pigeons in the Middle Ages

So. As far back as the middle ages the French have been excited about their “pigeonniers”, or what we might call a dove cot, in spite of the fact that these dovecots are home to pigeons.

If you have a large, beautifully decorated one like this: 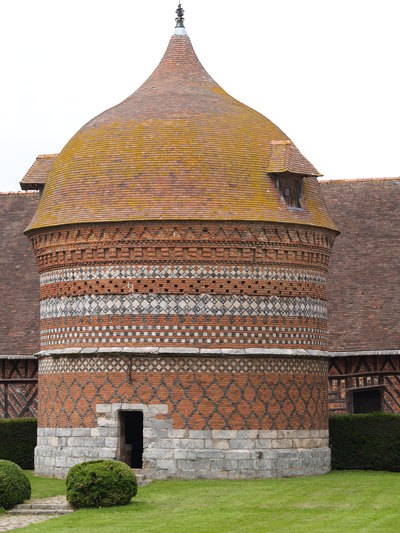 ….that would indicate that you’re someone pretty special indeed. Not just any land owner might possess sufficient pairs of pigeons to warrant such an elaborate structure. In fact, you had to fulfill certain conditions of nobility in order to build a sizeable “pigeonnier”, rather like tracing your roots back a requisite distance through time.

Why? The natural fertilizer produced by pigeons was a cash crop.

Yes, there was a booming market for pigeon poo, carefully collected and sparingly used to prod along reluctant grape vines, fruit trees and vegetable patches.  Grapes don’t grow well in Normandy and if you were a wine sipping noble you needed pigeon mess to help vines produce your own wine.

The meat produced by pigeons was also, and still is, considered quite refined and tasty. “Pigeon aux petits pois” is a well known dish among the Normans even today. I’ve had it. It’s good.

Exit the thought of today’s flying vermin inhabiting large cities and who feast on human rubbish. I’m referring to the plump, beautiful, and yes, tasty pigeons who thrive on seeds and berries in the Norman countryside. 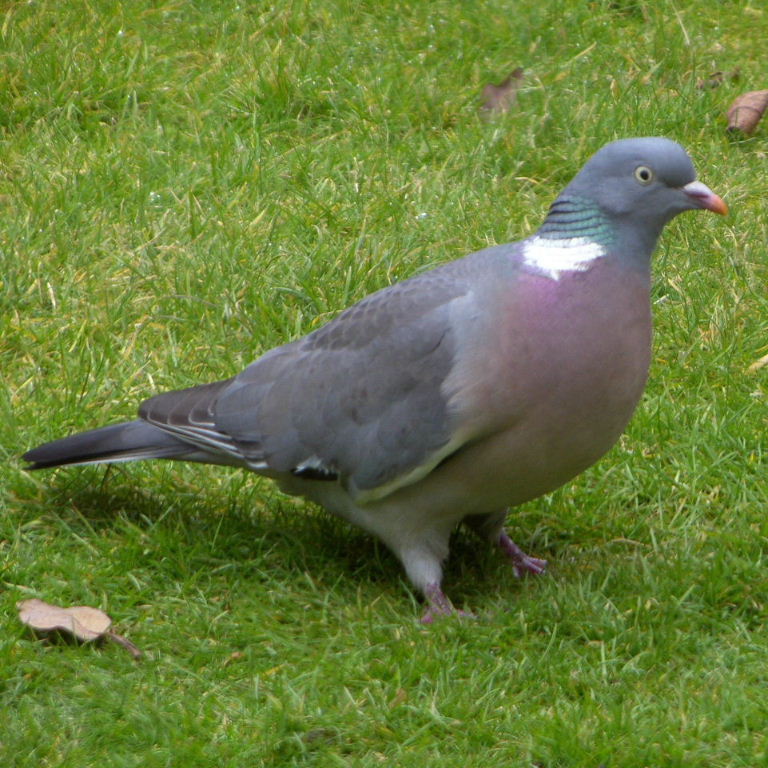 What has this got to do with WW2?

When the soldiers of the Third Reich moved in to absorb Normandy and the northern half of France into their expanding empire, the topic of pigeon possession moved into the dubious limelight of contraband.

Pigeons, while useful for food production, could also be used (thus, carrier pigeons) to carry messages to the now exiled Allied Army in England. The answer to this problem was quite simple. The entire German army dined on pigeon, some with peas and some without, thus eliminating an entire aviary population in one fell swoop. Sadly, the “pigeonniers” of Normandy fell silent and the locals looked to other sources of fertilizer for their fruit trees and vegetable gardens.

However, the usefulness of carrier pigeons was not forgotten by the clever thinkers at Bletchley Park.

Notably, the problem of detecting launch sites of the V1 missile, commonly known as the “doodlebug” by the English who were targeted by this vile invention, appeared unsolvable. The launch ramps were set at quite a low angle of take off and thus easily camouflaged in a copse of trees for example.

These unmanned murderous rockets could take off from a tree line exit and the entire logistical infrastructure would be invisible from the sky and thus hidden even to the low flying “grasshoppers” or Piper Cub reconnaissance aircraft.

This was a huge problem. How to find and destroy the V1 launch sites before they achieved Adolph Hitler’s goal of murdering the British civilian population?

Someone clever came up with the idea of parachuting carrier pigeons into Normandy.

You, a Norman farmer, are sitting near your fire late in the evening sipping some homemade Calvados. Suddenly you hear a loud “thunk” out in the yard and feel that in spite of the curfew, you need to investigate what’s going on in your back garden.

You spy a keg rolling about in the grass wrapping itself up in the cords attached to a small silk parachute. The thing is alive. You move slowly, hear cooing, and understand it won’t kill you. Immediately you scan the surroundings with understandable concern.

Who dropped this and why?

And do the Nazis know?

And has anyone else seen it fall or heard the noise?

Will your neighbors report you at the first opportunity?

Still, your curiosity gets the best of you, forcing you to bring it inside to look more closely at the contents.

By now you know it’s a bird. Probably a frightened bird. So you leave the keg shut for a while, allowing the creature to calm down before setting it free to careen around your living room.

In the meantime, you carefully detach the parachute and fold it up to hide. A few more sips of Calvados restore your nerves as you check that your blackout curtains are protecting you from being seen from outside.

Carefully you open the keg, and the bird, a carrier pigeon, sticks a curious head out. It’s used to being handled, and allows you to pick it up without pecking at you.

You see it has a tube attached to its leg. You remove the cap and slide out a small map, recognizing your village at once. 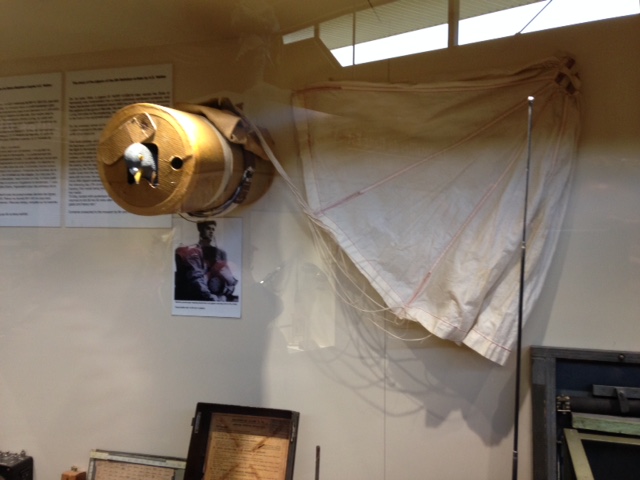 Along the top border is a phrase in French which you recognize as the motto of the “Order of the Garter”.

In grade school you and your classmates learned of William-the-Bastard-turned-Conqueror who migrated to England attaching that country to the famous province of Normandy where he was already Duke. One of the things he took along with him was the “Ordre de la Jarretière”, an honorary, knightly order founded upon virtue, loyalty and of course, honor. “Honni soit qui mal y pense” or “shame on he of bad designs”, decorated many a family shield, and was familiar to all those raised on tales of knightly conquest.

So, you know, just by this phrase that this is a legitimate pigeon and not an enemy spy pigeon.

Moral Conundrum! To X the spot where the Nazis have constructed a V1 launch site, placing yourself, your family and your neighbors in danger from German repercussions, not to mention that to do so will invite the Allies to bomb the smithereens out of your village, or to simply eat the pigeon, use the keg for firewood and recycle the parachute into new underwear for the entire family?

Of course some of you would choose option one and others option two. Who’s to say? Circumstances being what they are, with Nazis very publicly executing anyone who has anything to do with anything at all, both options have their valid points. You decide.

But sometimes the spot was X’d, the bird set free and the family got new underwear anyway. The unsung heroes of the option one scenario have faded into oblivion, never confiding in even the closest family members of the decision made next to the fire one night.

Those who opted for option two never sang their story in the shower either.

However, some of the carrier pigeons were decorated with medals.

These carrier pigeons were the proud recipients of the PDSA Dickin Medal. This medal was founded by Maria Dickin who’d also founded the British veterinary charity the PDSA or People’s Dispensary for Sick Animals. The medal was awarded to animals which, having helped humans in war time experiences showed valor and devotion. It began in 1943.

One such recipient is shown below. He was named N.U.R.P43.CC.1418 and is calmly sitting on a cushion awaiting his decoration in 1947, some three years after the fact.

Which begs the question, just how long do pigeons live, and secondly didn’t he deserve a better name? 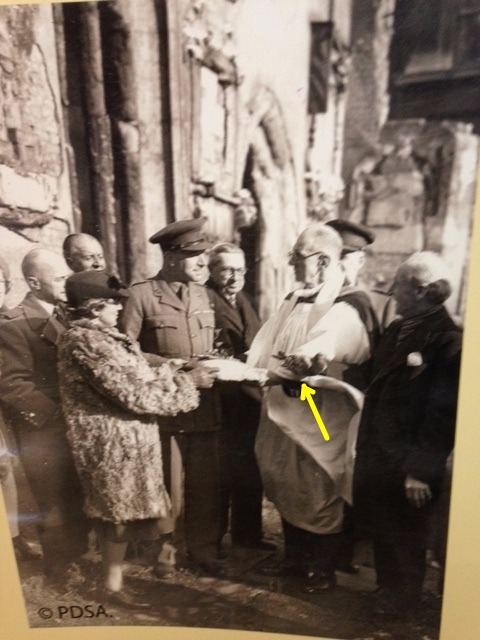 Of course the most sympathetic of readers will think he’s cute and did a fantastic job, and I agree. Others might wonder what finally became of him. I have no idea.

Still, to think that the fate of hundreds of thousands of Londoners hung on the wings of these hardy birds making it back across the 150 or so miles separating them from their pigeon homes in England without falling prey to a child’s slingshot is a wonder. To recognize that as a feat of prowess is a must.

This is one of the many stories that make up the amazing planning which brought about the defeat of Nazi Germany, one of the many strings looping together in the tapestry of the greatest military undertaking of all time.

Dogs took part in that success too. And one cat that I know of. But those are different stories.

A special thanks to the Pegasus Bridge Museum in Benouville, Normandy, and to the Utah Beach Museum where I finally got to look at my first pigeon keg.

Return to France Vacations Made Easy from the Carrier Pigeon page.