The Chateau at
Arques la Bataille

I don't know what image comes to your mind when you say the word castle, but for me Arques la Bataille fits the picture - it is a medieval castle with turrets, a drawbridge and a moat. There are other variations of course, but from a more recent period in history.

The castle of Arques la Bataille, located in the northern half of Normandy about five miles from the English Channel near Dieppe (map), is one of those. Sadly, it's in ruins.

And the really awful thing about that is that it was in bad shape, but still fairly intact up until WWII, when the Germans occupied it and installed anti-aircraft missile launch pads in the grounds, thus making it a target for Allied bombing.

Arques la Bataille is a castle dating from the first half of the XII century. Which means that for 800 years, just think about that for a minute - eight hundred years - this stone edifice stood and watched the English invade then leave, the French come back, then lose it back to the English and then the reverse two times over again, before it was severely damaged in 1944.

I think I can't be the only person to find something crazily sacrilegious about this.

Anyhow, as Arques la Bataille now stands, the ruins are closed to the public, having been deemed unsafe for viewing, and all that's left to do is to get a view from afar, then park up front and walk along the trail which circles the top of the exterior land works or 'courtine' above the dry moat.

You can see the outer walls and the tower platforms, the outer drawbridge gatehouse and get glimpse of where the 'house' part was situated.

Lucky for me, 10 years ago, you could still wander about inside at your own risk and I did so with my parents, my aunt, my sister, brother and most of my house guests. It was a bit of a billygoat thing, climbing around on crumbling stone staircases, and standing in what would have been window sills, looking out over the grounds inside the castle where the soldiers drilled, jousted and kept in shape.

One can imagine the smells of the kitchens, smokehouses, stables, chicken coop, manure pile (ancient compost!), the latrines, or lack thereof, and smoke from the fires used to warm the troops, the lord and his family.

The dry moat was pretty much used as a refuse dump, making it even more unpleasant for any brave attackers who might consider plowing through the garbage to try and get to the walls.

The noise must have been pretty remarkable as well, sounds of men shouting to one another, animals neighing, braying, grunting, cackling, snorting, and barking. There was always a smith at work clanging about preparing and repairing the chain mail tunics or the iron armor invariably dented or broken after each confrontation. And there were a lot of those throughout the 800 years as well.

The occupants basically lived outside compared to our standards, and as thus were constantly cold and wet. Their clothing being mostly made of wool, one can only imagine how uncomfortable it must have been to be damp and thus smelly all the time.

Stone walls do not retain much heat and the castle as such had no glass paned windows, oiled cloth covered the windows, and when it was really cold, these were kept covered all day and all night long. Imagine the dank, cold, daylight-less existence these lords and ladies of old led from November through February, and you'll never again complain when your air-conditioner goes on the blink.

We cannot however, see what their homes looked like, the ruins being just that - ruins. Yet a stroll around the outside of a building like this allows one's imagination to take a trip back in time.

Still, a succession of names brings to mind images linked with the chateau at Arques la Bataille. As you stand on the ridge overlooking the moat, you can see William the Conqueror, Joan of Arc, Henri Beauclerc - Duke of Normandy, and some French kings - Philippe-Auguste and Henri IV.

All of these historical personages walked or rode across the drawbridge, ate supper in the great hall, slept in the castle keep, and had their refuse dumped in the dry moat. And all of this before 1688 when the military fortress was abandoned.

As soon as the soldiers left, the locals took over, looting what could be looted and dismantling the inner buildings for the oak beams.

The recycling, as it were, of the interior castle structures was continued by the Bernardine nuns located in the village at the foot of the castle bearing the same name. Who would have guessed that nuns would loot a castle for the cut stones, to be used in the buildings they needed for their everyday use? 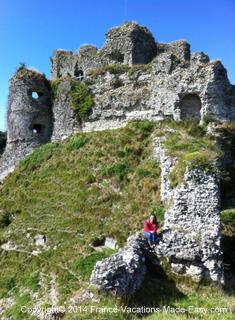 In 1875 the state took over and stopped the destruction of the noble stronghold, organizing guided tours of the interior up until 1939 when the Germans arrived and put an end to Sunday afternoon cultural outings for the local population.

In spite of this sad story, the castle ruins at Arques la Bataille stand tall, and strong on the strategically perfect promontory dominating the junction of two river valleys leading to the sea and the port through which the most frequent adversaries arrived by ship.

A trip through time awaits you, should you find the opportunity to visit, quietly without a guide or entrance fee, but if you listen closely and breathe deeply, the secrets of its past are there for the picking.