Chateau of Eu
or
Château d'Eu 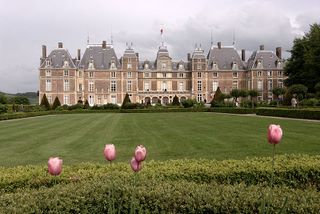 Just north of Dieppe about 25 miles are the three sister cities: Le Tréport, Eu, and Mers-les-Bains.

Personally I find Eu to be the most remarkable of the three as it boasts the summer royal residence of the last king of France, Louis-Philippe - the chateau of Eu.

It's with unexpected delight that one can drive into this sleepy little town and run into, literally, a royal residence.

Once again, the approach to the chateau of Eu is from the side when entering the town, so the “wow” factor is a bit smaller than what you'd expect from such a large castle - or great house as the British would refer to it. We think castle because of it's impressive size, but being moat-free, its probably a great house.

At any rate, it is huge, ornate, elegant and looks like a king could have lived there. As well he did, preferring to lounge in the woods and clipped gardens, escaping the hectic life of Paris.

Construction of the chateau of Eu itself started in 1578 under the direction of Henri de Guise and Catherine de Clèves. It was finished in 1665 under the Grande Mademoiselle, the cousin of the king Louis XIV. Its ownership changed hands over the years from the Duke de Maine and his sons, to the Duke de Penthièvre in the XVIII th century. 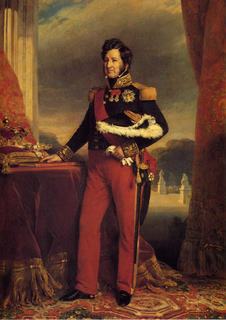 The chateau of Eu became the summer residence of king Louis-Philippe in the XIXth century. It was here that under the auspices of the “Entente Cordiale”, or the Cordial Understanding, that he played host to Queen Victoria on two separate occasions, in 1843 and again in 1845. They were said to have picnicked on the lawns and in the surrounding grove of trees of the chateau of Eu.

An unusual king, crowned after the abdication of Charles X, his second post revolutionary predecessor, he led a rather quiet life, with none of the extravagances of his forebears. He didn't systematically refute the basis of the revolution, which bought him some sympathy among the people and yet it was the middle bourgeoisie which admired him the most.

He was a family man, who surprisingly sent his royal children to school instead of hiring personal tutors. He balanced his own checkbook as it were and invested his own money carefully, in order to ensure that his family's personal assets would not decline over time. He kept a close eye on the financial affairs of the state as well, causing some to dislike him very much and others to applaud his modest lifestyle.

Throughout his younger years, he was soldier, carrying the title of lieutenant general in the service of the republican army. He spent 4 of those years in Philadelphia and many others in Austria.

He married in 1809, espousing Marie-Antoinette's niece: Marie-Amélie de Bourbon, Princess of the Two-Sicilys, daughter of King Ferdinand of the Two-Sicilys, or to simplify things - the king of Naples and Sicily. Her family was just as illustrious as her husbands', being composed of royal blood every which way around. Her four sisters married the kings of Spain and Austria, and the Grand Dukes of Tuscany and Savoie. It's useful to remember that Italy, at this time, was still composed of several monarchies, not yet assembled under one flag.

In spite of it being an obviously arranged marriage, the partners evidently got along rather well, producing 10 children, who we can easily imagine running through the hallways of the château of Eu and sliding down the banister of the grand staircase. Their names were, in order: Ferdinand-Philippe, Louise, Marie, Louis, Françoise, Clémentine, François, Charles, Henri and Antoine. I have to note the bizarre tendency to name their offspring with the girl/boy version of the same name- Louise and Louis, as well as Françoise and François. Not very imaginative to say the least. Unless the parents very much liked those names and decided that they must be used twice over. 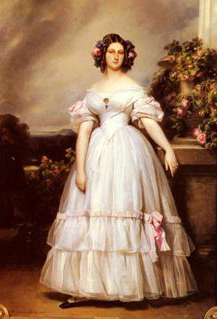 In this context, I think the choice of the middle child's name, “Clémentine”, displays just a bit of fun, finally, being the name for a tiny, very sweet orange grown in Spain - my favorite winter fruit, though exceedingly rare in the Normandy of the 19th century. I'm wondering if a smidgen of Marie-Antoinette's notorious frivolity didn't show up in Marie-Amélie's gene pool producing this charming break from the austerity of the other royal monikers.

As a political figure the sweetly named Clémentine cut a wide wake through the turbulence of European courts of the time, finally giving up the fight to claim the throne of France for herself and instead helping her son Ferdinand to become the king of Bulgaria.

She was said to be beautiful, intelligent and very generous with her fortune, distributing strategic donations to floundering politicians. A skilled diplomat, her son used her talents repeatedly throughout her lifetime to smooth over the usual anthills of European relations.

Quite a child for a pair of rather quiet monarchs.

The Chateau of Eu Today 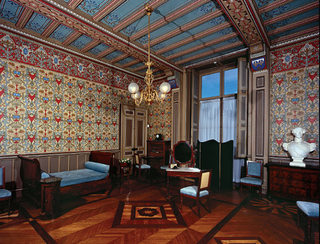 Today, the museum housed in the castle is devoted to her father, Louis-Philippe and displays a large number of furnishings and housewares used by the royal family.

However, in 1902 a terrible fire destroyed part of the chateau of Eu and though its restoration started in 1905 sponsored by the imperial family of Brazil, in the body of the princess Isabel de Bragance and her husband the prince Gaston d'Orléans, grand-son of Louis-Philippe, there are still parts of the castle who's complete restoration has not been finished, notably the “grand galerie des Guises”. Work is going on even now and will hopefully be finished in the very near future. 100+ years should be quite enough time.

The museum boasts a collection of 22,000 books, 145 paintings and portraits and the berline coach which once belonged to JeanV of Portugal and is the oldest French manufactured coach, made in 1727, on exhibit in all of France.

I personally enjoy contemplating the portraits of the European cream of the crop of the times. Many visitors, including myself, come away with raised eyebrows, rendered speechless by the beauty and mostly lack thereof, displayed by the portraitists of yore.

Very large Bourbon noses hang between virtually every set of eyes painted, leaving us to wonder if the dictates of beauty at the time were so very different from our own, and being rather happy to be descendants of the kitchen staff and parlor maids instead of the royals. They make Charles of England seem absolutely handsome in comparison. The ladies are also rather rounded, which makes me feel much better about my own person. All in all, a trip through the portrait gallery leaves almost everybody feeling quite attractive. The morale boost alone is worth the paltry entrance fee of only €4.

Once the visit of the chateau of Eu is finished, it is most definitely worth a short stroll across the courtyard to have a look inside the Collegiale Notre-Dame and Saint Laurent O'Toole church, dating from 1186. Do take a half-hour and go down into the very impressive crypt where quite a few of the Counts of Eu are represented in ancient stone carvings on their tombs. A slightly spooky experience and free!

Return to Chateaux from Chateau of Eu