The page on the calendar has turned, but I have to say Patrick and I really enjoyed turning it. Having arrived in the Loire Valley area on Saturday night, we settled in to the Chateau de Jallange for our three-night package.

Maybe you’ve read about the delightfully unusual setting for our dinner already here. A good night’s sleep, followed by a great buffet breakfast at the chateau provided the energy we needed to get rolling.

I had remembered sitting at a sunny sidewalk café in Vouvray with Paula and Bernie Mantei a couple decades ago.

Ok, it was more than two decades ago…I was a senior in high school and feeling very sophisticated sipping my very first glass of bubbling wine. In those days the drinking age in Michigan was 18. I had begged for special permission from my parents, as I was two months short of 18, when Paula and Bernie very bravely escorted 7 students around France for 3 weeks.

The bubbly white wine was unforgettable.

As Patrick and I looked about the town, I couldn’t seem to find the exact café. No matter, the wine is still the same.

Today, there is a plethora of different “caves”, aka: wine tasting places, some of which really are dug out of the chalk cliffs bordering the Loire and its off-shoots. Thus, the whole “troglodyte” thing with the restaurant from the evening before.

It’s a special kind of feeling to go underground into the façade of a chalk cliff to a naturally cooled, stone-vaulted room and sample wines. The atmosphere is unequaled. No wonder the Renaissance period “who’s who” showed up in throngs to enjoy both the wine and the place. 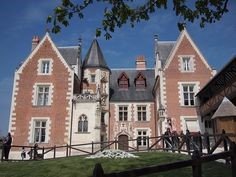 First on our list of stops for the day was “Le Clos Lucé” where Leonardo DaVinci lived out the last three years of his life having left Italy and his jealous competitors for a quiet life as the protégé of his number 1 fan: the KING of France – Francois the 1st. 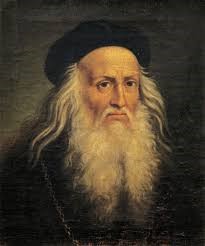 Once again, this meant a trip down memory lane for me, as I’d visited the Clos Lucé all those years ago on the high school French club trip.

Since he lived in this house from 64 – 67 years old, he probably looked a lot like this. He brought with him three of his favorite paintings, including the Mona Lisa, which he bequeathed to Francois the 1st, which is why it is part of France’s royal collection of paintings and why it hangs in the Louvre. 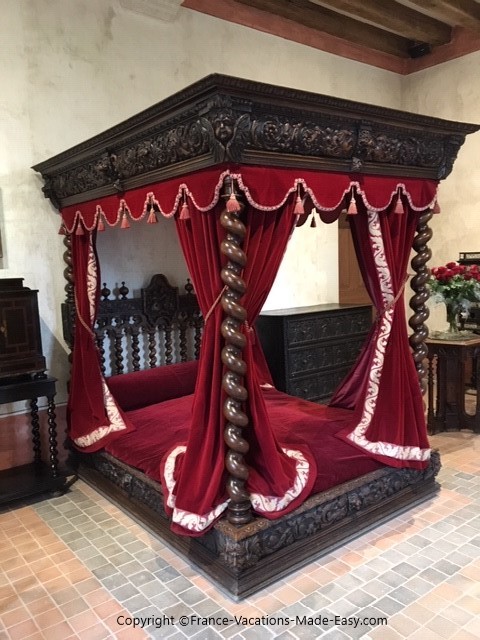 A visit to the house is as fascinating as the man himself.

You can see the bed where he passed away, of course. 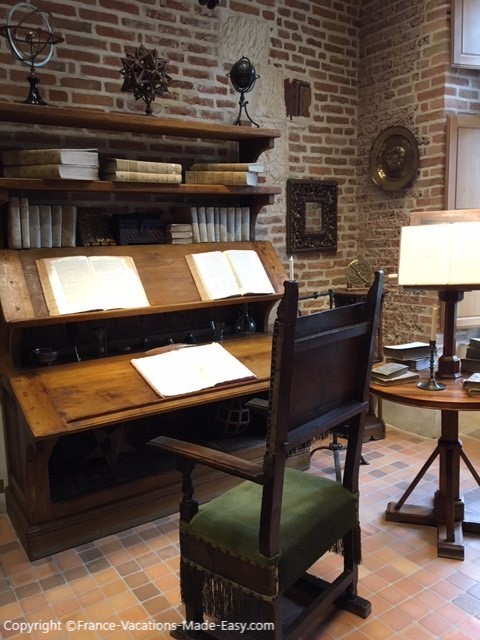 But more interesting to me were the rooms where he painted, read and spent the bulk of his time indulging in learning everything he could.

His reading desk made me envious. 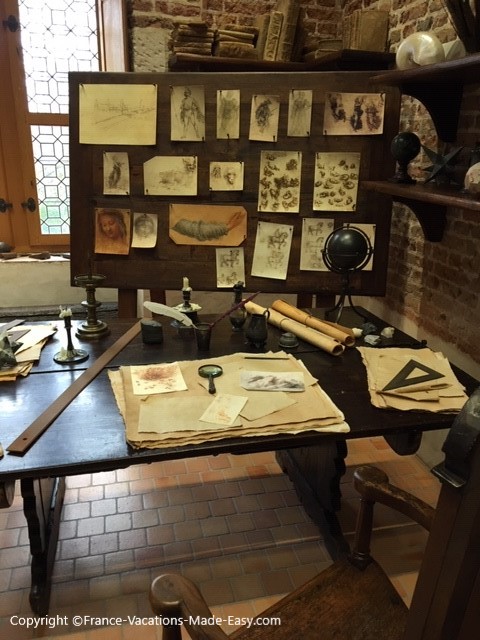 He also had a writing desk. For me, the ultimate luxury was to possess both. The angle of the reading desk with the lip for holding the book in place is so simply well planned that it makes me wonder why we don’t still use this technique? Is it because reading seems to have gone out of fashion? 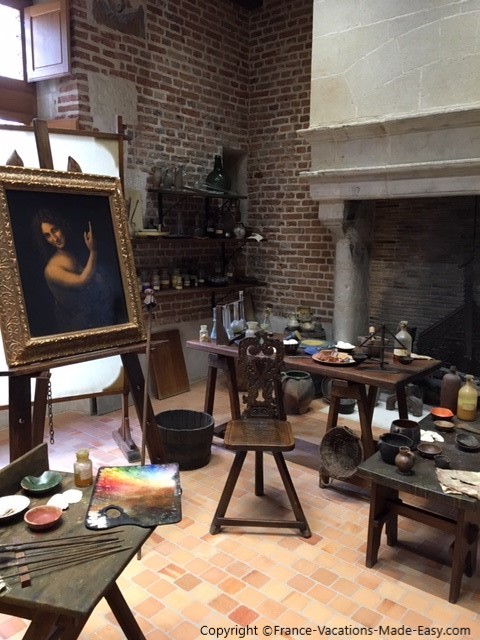 I love the pin board where his drawings compete for attention. The tools of painting were displayed in a space just adjacent to the writing desk.

The gardens outside are a more recent addition, the space where they are laid out was simply pasture land during Leonardo’s occupancy.

Still, it’s easy to imagine him riding a donkey or walking the 400 yards which separated him from the residence of his benefactor. 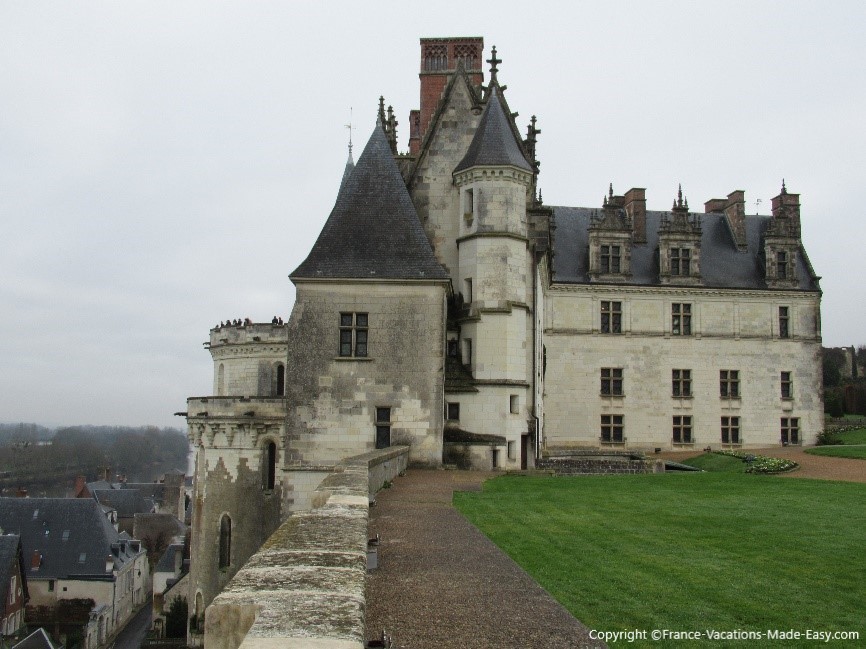 The streets leading to the royal residence at Amboise are charmingly twisted. Like most French towns, Amboise was built on high ground. It is adjacent to the Loire river and today spreads along both banks. A bridge spans both arms of the river which embrace a charming island, floating at the foot of the castle. The Royal residence itself is perched on high cliffs facing the south side of the river and overlooking the ensemble. It’s easy to see why a medieval fortress was built there to use the commanding view to oversee the comings and goings on the river.

Although termed a royal castle, Amboise was hardly a place where Kings lived for long periods of time. However, it was the place where they raised their children.

Often, the King would be gone for long periods of time, either touring his kingdom, ensuring all was in order, or fighting with his adversaries to set things right once again.

The Queen spent a lot of her time having children at Amboise, and then leaving to join her husband. Although, I’d imagine her riding off with much regret, as this place is so lovely. 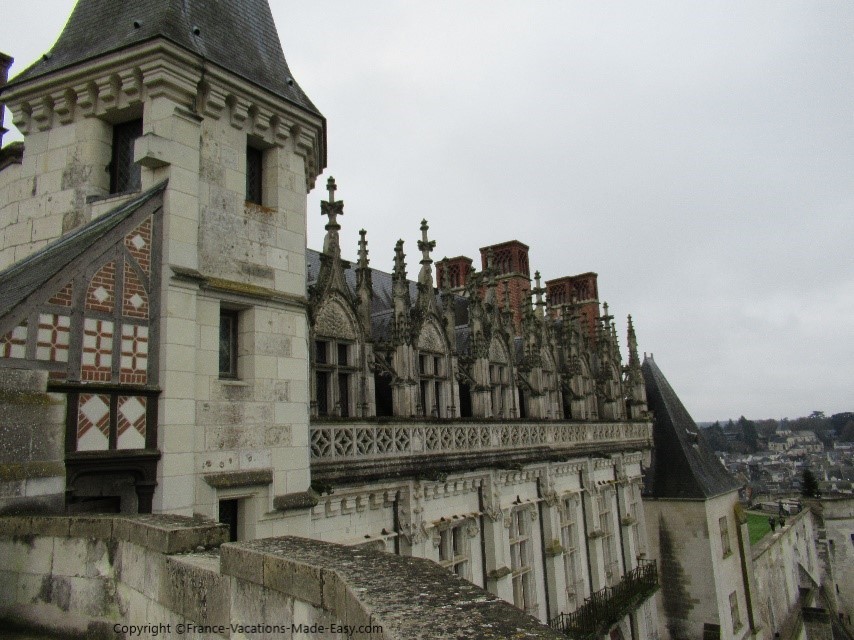 Leonardo rests in St Hubert’s chapel, which today is set off to one side of the gardens, but which at the time was linked to an entire wing of the castle, now sadly destroyed. As a final resting place, it’s fairly spectacular although I wonder if he didn’t long for home as his life drew to a close. 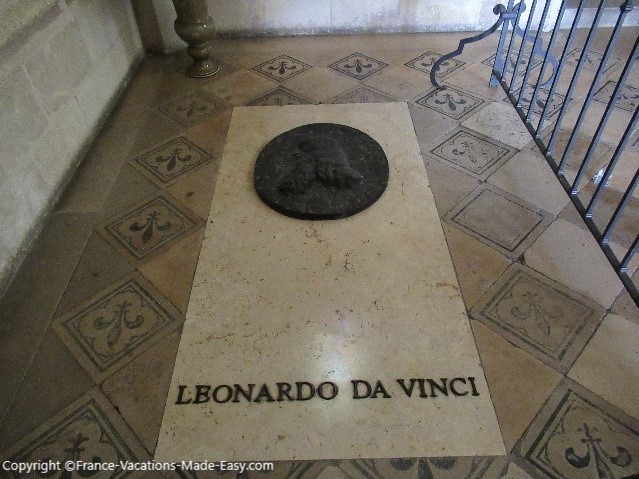 He left us with many words of wisdom but these seemed perfectly fitting: “Just as I thought I was learning to live, I learned to die.” But what a life, indeed! France is still very proud to have him as a guest.