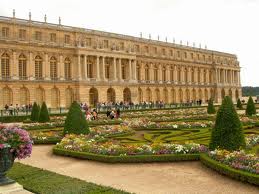 Things I found out while visiting the château de Versailles :

You’ve heard of it, I’m certain.

It’s the BIG chateau just outside of Paris with a profusion of ornate, gold-leaf, decorative stuff all over the inside. It’s where the word “opulent” was born. 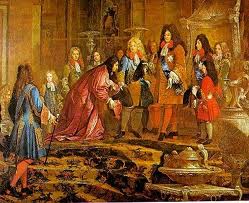 It’s synonymous with the SUN KING, Louis XIV (the fourteenth), apogee: circa 1675, one of the guys sporting a wild, woolly, chest-length wig.

He's the monarch who actually believed that he was the personification of GOD on earth, second to no man.

That’s why his house was so big.  It needed to fit his ego and the thousands who made up his daily entourage.

They came to petition him for favors and he in turn blessed them by allowing a favored few to witness his rising from bed and his “toilette”, i.e. getting dressed, perfumed and tweaked into his usual perfection. This also involved the morning sit on the small throne, with a lucky few to be the wipers. No, I’m not kidding.

Protocol during the heyday of this castle was so complicated that those who wished to approach the SUN KING within sniffing distance were tutored for months before even hoping to gain admittance to his presence. You’ll have heard of the expression “make a faux pas”. That was part of it. A false step, or one tiny blunder in the tortured etiquette of the day was certain to see you banished from sight with no hope ever to return. No do over. No passing go and certainly no collecting the favor you came to beg for, let alone 500 francs.

Depending on the severity of the faux pas, such as turning your backside to the eyes of the SUN KING as you left the room, might even buy you some time in the Bastille, the infamous prison. One most definitely didn’t want to hear THAT door clang shut, because opening it again was entirely up to the fickle good will of the offended. 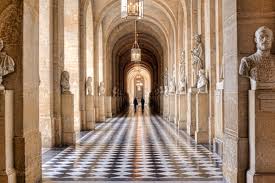 Versailles, the palace that Louis called home, is wondrous.

I choose that word for a reason. I can’t say wonderful because, unfortunately it’s rather empty; pretty much under-furnished, and sadly so, I must add.

Like many of the chateaux in France, the original furnishings were pretty much scattered to the four winds during the French Revolution. A good deal of it produced golden flakes of ash during a vengeful, humongous bonfire in the courtyard. 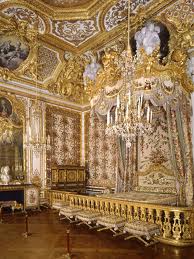 The bits and pieces that have been retrieved and which are on display are so very stunning, however, that it begs the question: how much of this stuff could somebody actually keep in one room and not be blinded for life? Gilded everythings used to cram every space available, and the overall effect must have been serious overkill.

In all honesty, the diminished collection is sufficient to express the general idea of how very wonder-full this castle must have been.

It doesn’t bear imagining the staggering amount of money that Louis spent on furnishings.

Not to mention the lavish extravaganzas put on for entertainment.

The Lead-In to the Revolution...

Versailles was home to some of the biggest parties known to man throughout history. Nothing was too much, too grandiose, too surprising, too lavish, too stupendous for the king’s amusement. He lived to be 77, and 72 of those years as king.

His grandson carried on in his grand-papa’s footsteps quite well, overdoing everything for another 59 years before his grandson: Louis XVI (the sixteenth, the unlucky one) became king. 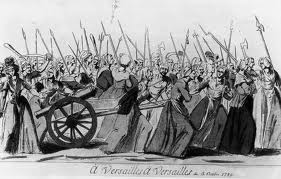 Not very surprisingly, the peasants revolted.

They were starving, and being sent to war, and taxed, and their wellbeing generally ignored. No sense asking for help, unless you could forage up enough money to put on a sufficient show of wealth to be admitted to the palace, in which case you weren’t really one of the breadless needy to begin with. 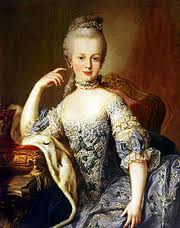 Marie Antoinette, who at the time was wed to the great-great-grandson of the aforementioned son of GOD, supposedly blurted out a good one when she heard tell of the ruckus outside the garden walls. It’s the stuff of legends: one of the first internationally celebrated urban legends regarding France, in fact.

When Marie was told that the great unwashed were clamoring for bread, because there was no more to be had, she is reported to have responded in blithe ignorance: “Let them eat cake!”

Seriously? How could anybody be that ignorant?

In truth, she didn’t mention “gateau” or cake at all. Marie didn’t eat bread. The royals ate a sweet, buttery, rich concoction called “brioche”. It’s a Sunday brunch treat today. It was their everyday fare.

Wondering in all innocence why anyone would eat bread, because it was a coarse, dry, bland thing, she suggested that the peasants try something more fun for a change of pace, and forget bread altogether.

“Have some brioche!” she let loose, clueless to the real problem at hand.

To her defense, she lived in a gilded paradise, with no contact to the outside world. No one who wasn’t just as primped and pompous as her stupendous self was ever allowed within sight of her.

Truthfully, she’d been over-protected to the point of complete ignorance, in the Webster’s dictionary sense of the word.

It was a blunder, but of the uncontainable sort which gallop out of the room to spread like wildfire.

Have you ever played the Round-Robin game? Let’s look at uncontrolled rumor spreading like this.

You go off on a business trip with your boss. His luggage comes off the baggage claim the worse for wear and you mention it to a co-worker the next morning at the coffee machine. “His bag was looking pretty awful and I felt sorry for him dragging it through the airport on one screeching wheel.” A jealous co-worker, who wasn’t invited to participate in the out of town trip, overhears part of your conversation and within a pair of hours your innocent comment has morphed into something akin to this: “Patty said Mr Stevens’ wife is a horrible old bag! He had to literally drag her by one arm through the airport as she was squawking up a storm! I wonder if they’ll have to sell the house when they get divorced?” By lunch time, Mr Stevens has called you into his office and you’ve been guillotined.

Voilà! That’s what happened to Marie Antoinette.  She was silly rich, and she got invited to too many parties.

I wonder what will become of Paris Hilton?

If you’d like to visit Versailles, (and who wouldn’t?) it’s conveniently located about a half hour train ride from the Gare St Lazare in Paris. You can go to that station and buy a round trip ticket for just  8€.

Then hop on the RER Transilien line “L” and in 28 minutes you’ll arrive in the very posh town of Versailles. Get off at the station marked “Versailles Rive Droite”.

Ask somebody, because every peasant around knows the way to the castle, although considering the price of real estate in Versailles you may have some difficulty finding a peasant.

Anyway, not to worry, it’s sign posted and about a 15 minute walk from the station. It sits on a small rise in the center of town and is absolutely un-missable.

There are always a lot of people wishing to take one of the many tours and I must admit that choosing which tour to take is a modern day conundrum.

There is a solution to this.

If you hire a private guide, and in all honesty, it’s worth not having to debate the chateaux tour options with your travelling companion, you can gain entrance to the building and let yourself  be ushered through at your own pace, seeing what you want to see, as much or as little of it as you’d like.

During your tour you can ask as much or as little as you’d like, and hear the anecdotes which will be meaningful to you. And you can hear the guide, since he/she is only concerned about what you want to know, and speaking directly to you, not to a rowdy crowd.

Hang on! You think that’s cool? There’s a bonus! Guides come blessed with a plethora of languages.

So, not only will you be able to go where you want but you’ll actually hear AND understand what’s being said to you! 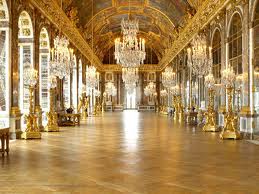 Hesitate no longer, a private prance down the gallery in the Hall of Mirrors awaits you, with the spirits of Marie and her ladies in waiting judging and debating over every “pas” you take.

And don’t forget your wig.

Return to Exploring France from Versailles