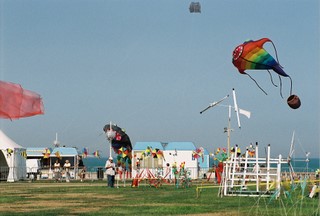 I can’t help notice the kites dancing in the sea breeze above the buildings under a pristine sky and against the deep blue background of the English channel, as I drive down the hill into town along the same road taken by the German tanks when they rumbled in to take possession of this lively port and valuable ferry link to England in 1940.

I imagine the atmosphere on that day was very different, most likely a quiet hush reined supreme as the population watched with grim acceptance as the oppressor took over their lives.

On another September day...

I can also imagine the festivities of another September day, this one in 1944 when Canadian troops marched down this exact same hill into cheering crowds of ecstatic locals, little girls running to give late blooming daisies to grinning uniformed young men, the ones who strode in to set that same population free.

A symbol of freedom 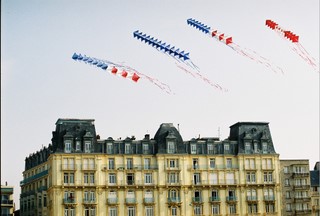 The party has lasted a good long time and today the town celebrates its freedom once again with the free flying rainbow hues of an enormous eclectic collection of kites.

For what better symbol of freedom than a colourful kite flitting left to right against a blue sky? 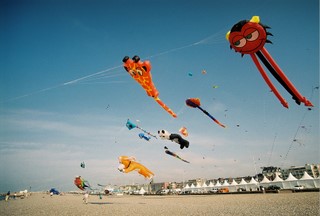 The pleasure of watching an entire sky full of them is common to all ages and walks of life. Old and young, all races, all religious orientations, all political parties, in short everybody loves a kite.

And nowhere have I seen such a great place to fly them as in Dieppe.

Hold on to your hat!

The geographic setting of the town is perfect.

The wide lawns stretching out along the beach are stuck between two walls of high cliffs to the left and right of the water create a perfect wind tunnel to send just about anything dancing up to the heavens.

However, these same conditions sometimes take hold of hats, umbrellas and ladies skirt hems. Mary Poppins would have loved it here. 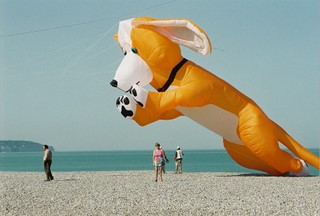 Every two years in the second week of September, when the weather is still mild and the crowds of sea bathers have diminished, the beachfront is invaded by this spectacular festival.

There are dozens of stands selling kites for novices and for the initiated, because kite flying has taken on a new surprising sophistication.

There are complex technological wonders bigger than my car which twirl, spin and literally dance synchronised to music when aloft.

The days of a sheet of paper and some sticks hooked to a string are long gone.

After the Saturday evening extravaganza, the sound and light night-flight performance given by the winners of the various competitions held throughout the week, I stopped off for a cold beer at the “Cambridge” pub.

Various English competitors and performers had the same idea, and we shared an informative conversation regarding the technicalities of a specific lighted flying wonder which had caught our attention as it flashed random disco lights from 300 feet above the beach.

My friendly informant belongs to a group from southern England named “Banner and Flag”. 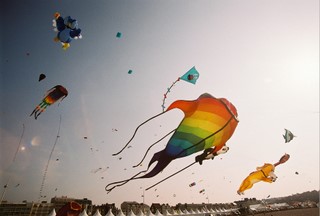 I was surprised to hear that the kite holding the battery powered light system weighing a couple of pounds had a wing span of about 15 feet and was about 7 feet high. It was attached to a really long set of strings.

And yes, I did ask if their strings got wound up in tangles. It is the one problem known to kite fliers everywhere. I was told that patience is mandatory if successful flight is to take place.

No frustrated string cutting and subsequent knot tying is allowed. 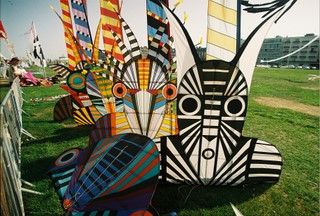 The beer gave rise to details about the different countries with teams com-peting, around 40 in all.

The winners had perform-ed that evening with double winged crazy kites in an aerial ballet set to zippy music much applauded by the chilled crowd. (It was about 40°F at 11pm on the beach-front, and we should have stopped for hot chocolate!)

Ready for the next one! 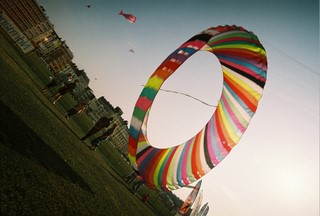 The kite festivals are always a success, and they draw a huge crowd.

The local hotels are booked for months in advance and the restaurants do a snappy trade for the entire week.

A visually spectacular, free event, the visiting foreigners, competing teams and spectators look forward to the next festival.

And until then, the kites will still fly! 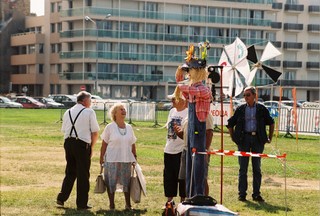 In the meantime, the many kites sold to novices from all over will still decorate the sky above the beach in a silent, yet enthusiastic tribute to the freedom of this small coastal city, and smiles will be shared by those watching their antics.

Return to Events and Happenings from Dieppe International Kites Festival