Just a few weekends past was the 69th anniversary of the D-Day landings in lower Normandy.

As usual, in the days leading up to the anniversary, French television aired themed films, notably classics such “The Longest Day” and the more recent “Saving Private Ryan” in order to remind people what the commemorations stand for. 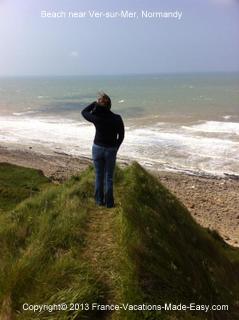 While certain members of the younger generations may need these visual reminders, I am always pleasantly surprised at the genuine interest shown by the attendees of these ceremonies.

Granted, if somebody makes the effort to attend a ceremony, he or she is interested in the event. Fine.

Still, I’ve now been to several of these D-day landing commemorations, in different places and of different dimensions.

You may remember a previous article I wrote regarding last year's commemoration in Dieppe of the first Allied Raid on occupied France which involved upwards of 5000 Canadians as well as lots of British soldiers and 50 US Rangers.

August 19th, 1942 stands out as a sad day in the history of our city, and it is remembered by all with much shaking of heads.

The 70th anniversary was a huge affair which lasted several days and took in several different sites along the 16 kilometer stretch of coastline, involving several different towns, and lots of diplomats. I was pleased to have brought along some representatives from Michigan to show that the USA and its citizens have not forgotten the first American soldier to leave his life in France during WWII.

This Year - A 69th Anniversary 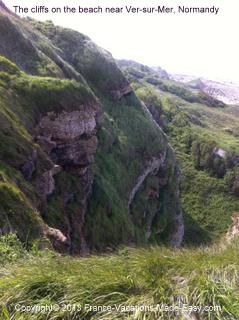 This year’s 69th anniversary of D-Day landings found me at Ver-sur Mer in the company of a local elected official, listening to the speeches given by the mayor and a uniformed Army chap from England.

The oldest citizen of the small village presented an honorary medallion to the daughter of one of the guys who ploughed through the rough water, stumbled in the soggy sand, dodged enemy bullets and grenaded a tiny coastal tram shelter. He then slogged up the hill through the marshy wet lands tripping over ditches and tiny dams, bumping into herds of sheep, to finally reach the village where he met up with his comrades, all equally harried, slopping wet, cold and miserable, having seen far too much to ever sleep soundly again.

He was lucky. He made it that far.

Many others did not. 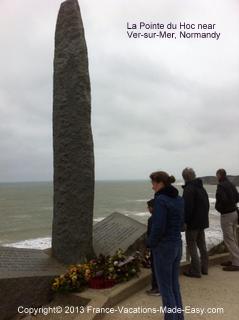 They are remembered with solemnity.

The survivors and the fallen. The wounded and the sound. The lost and the forever sleepless.

This is important stuff for the French people. They have not forgotten.

There have been political squabbles about this or that transitory event since 1944; moments of camaraderie where France and the USA have stood side by side agreeing on issues of international importance and moments where the two countries and their politicians don’t appear to see eye to eye at all.

Remember the “freedom fries” incident? Ridiculous stuff, easily relegated to the place in history where silliness lies to rot and disappear. At least we all hope so.

I call it silliness because when you attend even one of these ceremonies commemorating the D-day landings and watch the faces of the participants, and witness the shedding of tears by young and old, you know that an unbreakable bond was forged by those young men of various nationalities: the Allied forces.

The moving bit, for me at least, is that the people who refuse to forget were not there, were not born, and were not directly involved. They’re the ones who shed tears for the young men who forfeited their futures so that our collective future could unfold.

I can think of no greater tribute than to perpetuate the memory of an enormous effort orchestrated and carried out by a coalition of Allies for a common goal.

A single trip to the cemetery at Colleville sur Mer proves that the visitors are not exclusively American, a lot of French is spoken.

The visitors aren’t all old people either. Quite a few are very young indeed.

Families abound. That alone makes me sit up and take notice. Young parents are teaching their kids about sacrifices made for the generations to come.

No, the French have not forgotten, nor should we.

Return to Events and Happenings from D-Day Landings in Normandy