The Birth of "Through These Doors"

For many Americans a journey to France begs a side trip to Normandy. As a matter of course, I’m in 100 percent agreement.

I’ve lived in Normandy for over three decades and know what wonderful a place it is.

Yet, for a large share of the modern world, the name Normandy coincides with the largest military undertaking of all time, involving over three million Allied individuals and more Allied countries than one would initially think.

For the first two decades of so of my life in France, I pretty much avoided the 50 mile long beach stretching roughly between Caen and Cherbourg. I wasn’t much interested in “modern” French history. WWII was a time period belonging to the disconnected musings of a close lipped generation of veterans, my father and uncle among them. My brothers had played with G.I. toy soldiers and tanks, recreating the battles they’d heard about, and about which little girls were pretty much blissfully ignorant, instead concentrating on Barbie dolls and piano lessons.

As a college student I became interested with the Renaissance period, the elegant architecture, extravagant clothing and fascinating developments in poetry, literature, music and art. Over the space of the next twenty years, each visit to a castle over here on this side of the pond would reinforce my interest in the politics and lifestyle of Europeans during the 15th and 16th centuries.

For a period of about five years, in the mid eighties, my day job took me to Rouen: the capital of Normandy. Rouen is synonymous with the medieval period. The 13th and 14th century half timbered facades of the city center bear witness to names everyone is familiar with. It’s a slight trick of the imagination to step back in time while turning a corner, or entering a narrow courtyard on a side street off the rue Damiette knowing that Joan of Arc walked there, Richard the Lionhearted left his heart in the cathedral and even William, Duke of Normandy fought to keep it his own.

Norman history has a wealth of stories to tell. I like stories - my mother worked in a library - especially stories about ordinary people and what life was like for them in this rich Norman past.

So I decided to write a book. Historical novels being my reading of choice, the genre was a no-brainer.

It started out to be a story woven through four different time periods, set in Normandy, but in upper Normandy - my Normandy - the primary character being a venerable manor house telling its history as illustrated by the successive generations of people linked to it.

I had been struck by the fact that one cannot own an ancient home here. On the contrary one becomes owned by it. A sort of stewardship is set up and what lasts throughout the centuries is not the people, but the building. When you sign a deed here, there’s a sort of unwritten contract binding the owner to devote her time and money to the upkeep of their own personal historical monument, listed or not. You feel responsible for passing it along in better shape than when you got it. If you don’t feel that expressly, in your blood and bones, then you need to buy a new build house, and be done with it.

Coming from the new world, filled with new houses, new cars and new everything, I dove into the charm of the crumbling ancient. I married an old farm house myself, not financially able to opt for the grandeur of a manor, although there were lots available. I’d visited several, and fell in love with a few. Still my personal engagement didn’t allow me that particular folly. Not to date, that is.

Anyway, as I got writing the story about a fictitious manor house, there was a hole in the time line - a gaping hole. I tried to ignore it, skirting around it to maintain the links between the present day character: Debra, and her far off predecessors. It was impossible.

Who was I to avoid the Nazi occupation of Normandy?

But before all that, four long years of living with the enemy took their toll on the Norman population and landmarks. Those historical monuments, the living history of over a thousand years of Norman past were taken over, exploited, abused and finally abandoned in a sad state when the Germans fled homeward, post June 6th, 1944.

The gaping hole in my story was of those generations, the WWI and WWII participants, the by standers and the lost.

Watch my video of explaining this:

So, one day in 1940, a young French girl came around the corner of the barn, toting a basket of wet German undergarments and shirts, the khaki green work uniforms of the Wehrmacht. She pinned them to the clothesline against a wind blowing in from the coast near Dieppe, not fully realizing how compromised her Normandy would be in just two short years. Paulette had a story that needed telling.

Little by little, it became clear to me that her story was taking over the book. I let her have free reign and “Through These Doors” sprang to life.

And then the research...

The necessary research to complete the details of the raid on Dieppe, code-named “Operation Jubilee” led me to a group of devoted volunteers manning the memorial museum in Dieppe housed in the former municipal theater located place Camille St Saens. They signed me on and shared their knowledge and personal stories of life under the occupiers.

Some of the members are quite aged themselves and remember August 19th, 1942 when the Canadians, Brits and the first fifty US Rangers tried to slip into town and surprise the Germans. It was a disaster. Yet, it set the stage for the success of D-Day two years later.

From their enthusiasm and warm welcome my interest in WWII and the consequences on life in Normandy grew in leaps and bounds.

The sequel to “Through These Doors” moves backward through time and some of the characters in the first book show up as younger versions of themselves. This new time frame has sent me scurrying off to the Somme region to research WWI and how it affected the inhabitants of Bout L’Abbé.

But that’s another story.

Should you choose to visit Normandy, and specifically Dieppe, you may pop in to visit the terrific people running the Memorial Museum. It’s open every weekend and French holiday from 2:30 to 6 pm, starting in April and closing in October. During the summer (June, July and August) the museum is open every day except Tuesday from 10 am to 12:30 and again from 2pm to 6pm. The entrance fee for an adult is something like 3 euros. They also have a website: 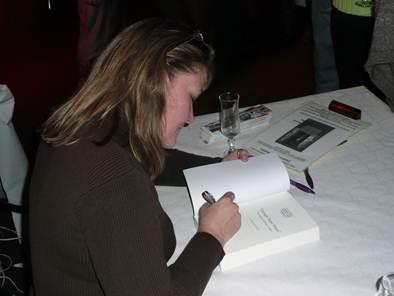 Still, please feel free to connect with me either via this site, or via my author Facebook page: Diane Condon-Boutier, if I can answer any questions you may have about “Through These Doors”, trips to Normandy, Operation Jubilee or D-Day.