What is it about the French-British relationship?  Just what is it between these two neighbors/"frenemies"?

I’ve been living in Dieppe for the past thirty years and have come across countless anecdotes regarding the French-British relation-ship and that love/hate thing going on between these two neighboring countries.

As an American, I am bemused.

To put the geography in context for you, Dieppe is located in the upper half of Normandy, sitting on the English Channel, or La Manche (the sleeve) as the French refer to it.

The Seine River is the natural border between the two Normandys, the upper and lower halves. It runs through Paris, splitting it in two halves, as it also splits in two Rouen, the historic capital of Normandy before flowing west to empty into the sea at Le Havre.

If Dieppe faces south to the Norman capital of Rouen and further on to the French capital in Paris, it also casts an interested, if backward, glance across the Channel to a neighbor on the south coast of England: Newhaven, the port into which Dieppe’s ferries steam twice daily.

The British love France. And while they regularly pop over to eat, drink, stock up on wine and sometimes move in forever, they also admit to putting up with the French without really liking them. 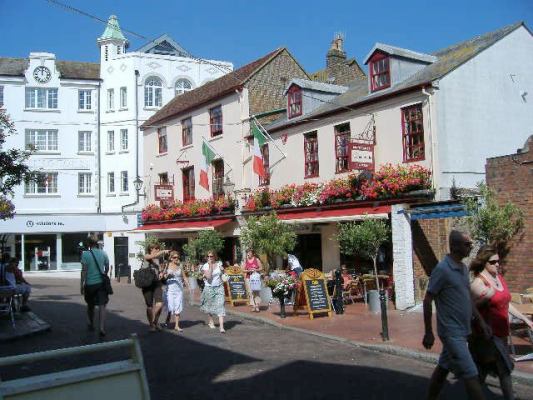 The French, on the other hand go to England and schmooze about hip pubs and shops, buy up English fashion when they think no one is looking, and absorb the cosmopolitan chic of Brighton and London.

If you listen to a resumé en français of a trip across “the sleeve”, the French would appear never to eat while in England, condensing their visits into short spurts so as to not be obliged to consume local food or drink which they like to think substandard. Yet if you pay attention to the voices in pubs across the way, you’ll catch the French out and about consuming fish and chips washed down with flattish ale. They look quite happy. Although they won’t admit it once they get back home, laden with shopping bags.

The French also move to London. Denis, an ex-pat friend of mine refers to London as the city with the second largest French population in the world, second only to Paris.

Dieppe’s status as a conveniently located deep water port makes the city a gateway, and a historic one at that, for the comings and goings of the French and the English who adore disliking one another.

Some History of the French-British Relationship

All this cross channel travel started when the men of the Gaul tribe first used boats to follow the schools of fish which have supplied a livelihood for countless generations of Dieppois. After a few hours of fishing they bumped into England, thus beginning endless arguments regarding fishing rights and quotas which continue to be a haranguing mess to this day.

The unavoidable tourist meal in Dieppe is moules-frites, or mussels and fries. This dish is also available along the south coast of England, and is rather more pricey if they name it moules, just like in France.

A “Dover Sole”, which is a staple of sea side eateries in the UK is another name for Sole Dieppois, which is comparably pricey both sides of the sleeve.

Cakes in the UK are rather more chic if they’re named chocolate gateau, and the French have invented a “pudding” of their own which is a hodge podge of yesterday’s leftover cakes revisited and glazed.

You see what I mean about this French-British relationship? They can’t get enough of each other.

Aside from disagreeing on the name of the body of water separating them, you’d think they were in love.

There are other points of contention between these grouchy neighbors as well. One of the most common still pops up after close to 600 years.

Somebody burned Joan of Arc. 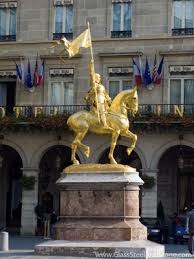 Just who is responsible remains a matter of perspective.

History names the actual perpetrator as a certain Catholic Bishop: Pierre Cauchon. Unfortunately, his name in French is a homonym for pig, a fact which would make anybody testy. Still, that’s no reason to burn virgins. Monseigneur Cauchon was clearly of French origin. His first name was, after all, Pierre. But the French, once Joan was posthumously pardoned, forgot that and blamed it on the English.

Granted, it all took place in Normandy, which was a part of the British crown at the time. Joan had been captured in Calais, which was English, although located on the continent, forced to walk some 100 miles through St Valery Sur Somme, Eu and Dieppe, finally arriving in the Norman capital: Rouen, equally belonging to England at the time.

The church didn’t much dispute her role in helping out France. The clergy were more concerned about the outrageous behavior of the young virgin, who wore men’s clothing and rode a horse astride, debating whether she should be allowed to continue breathing after such serious transgressions.

The “hearing voices” bit was a secondary charge. 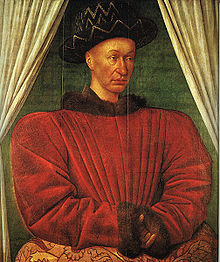 She had proven herself to be a brave soldier and devoted strategist, and as such restored faith in the validity of the French crown, pretty much abandoned by a shy young man: Charles VII, unconvinced of his rights, until Joan set him straight during a visit to the castle of Chinon. That a young woman, and a virgin to boot, should have enough character to woo the should-be-king of France into stepping into his king stockings and hustling up to Reims to be officially crowned was unimaginable.

Pierre Cauchon believed that Joan was empowered by a dark force and he set about fabricating proof. The methods he employed to do so were frowned upon by his contemporaries, yet judged acceptable when dealing with such a devil as Joan was imagined to be. Bishop Cauchon convinced a group of sheep that for the good of the people, Joan should no longer be. 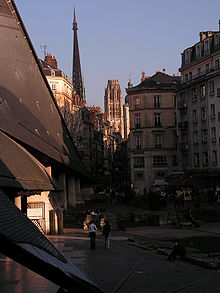 To the horror of said people, who loved her courage and strength of conviction, on May 30th, 1431, Joan was burned in Rouen several times because she simply wouldn’t stay lit. Her bones were then scattered into the Seine River to prevent citizens from harboring relics for worship. We’re speaking of English citizens, since Rouen was English. Why they were so smitten with Joan who aided and abetted their sworn enemy: France, is a mystery for which I have no clues, aside from guessing that she must have been a truly inspirational personage at 19.

I can only guess at Pierre’s dismay when 25 years later the beneficiary of Joan’s willfulness, the now more confident King Charles VII posthumously pardoned Joan, thus tossing Pierre and his reputation into a sticky mess. Lucky for him, he was already dead and buried in the cathedral in Lisieux.

However, all traces of Bishop Cauchon’s sepulture were craftily removed, in the hopes of preventing vandalism. Even today, the stone which marks the entrance to the private crypt in the wall of the choir goes unnoticed. 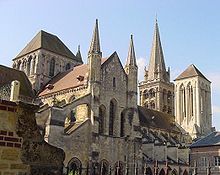 The people of Lisieux, clearly a French city, are none too pleased to admit that their cathedral harbors the nasty chap responsible for torching the patron saint of France: Joan, the Virgin of Orléans.

When asked about his presence, and nationality, invariably the response goes like this: “Yes, BUT…Cauchon was the Bishop of Rouen, and Normandy at that time was under English rule, so officially, the English did it.”

And Then There's the Sports

When England plays France, life as we know it grinds to a halt in both countries. For two breathless hours international cross channel relations are suspended and old feuds are re-fueled.

This event is officially referred to in the sports world as “The Crunch”. It is a particularly woeful day for the thousands of Franco-British couples produced by Cupid’s wayward aim and too much good wine. Noticeably, nine months after a crunch match, remarkably few births of dual national children are recorded in the town halls of the two “frenemy” countries.

Apparently even when you win, you lose. 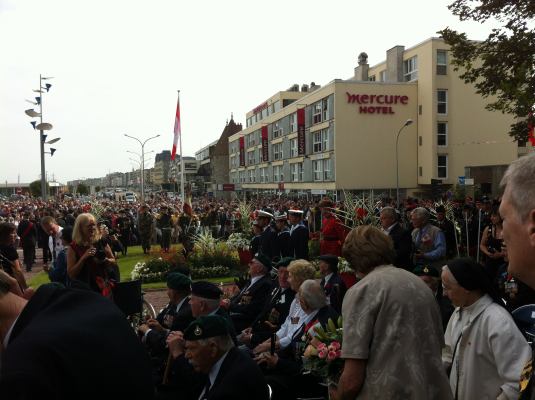 The French never forget who stood up first to lend a hand in the 20th century, against both invasions of the Huns. It is particularly heart-warming to see veterans embracing their allies from across the way during commemorative ceremonies.

Invariably, more wine is involved and the French-British relationship is glazed with a renewed shine as each side pulls out their dog eared dictionaries.

And Long live the Queen!

But in this Yankee Doodle’s opinion, the important bit is continued communication in the on-going French-British relationship.

Return to An American in France from The French-British Relationship